On the Shoulders of SHEROES! 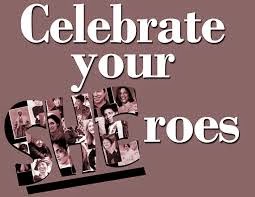 You might think this a little early for Mother's Day, since we're days away from the month of April.  Or even a little late for Women's History Month, as we ease out of March.   But really isn't celebrating fantastic women in your life always timely?

Wherever you are and whatever you're doing, I'd like you to take a moment to think about a woman in your past or present who has made an indelible impact on your life and just say Hallelujah! What would I have done without you?

Recently, I had a chance to do just that along with nearly a hundred other sisters as we met to celebrate our Sheroes at my church's annual women's tea.  Yes, you Modern Hipsters we're still doing the Tea Thang!  But there was  more going on at this tea than tea sipping and munching on finger sandwiches.  We got schooled in how to leave a legacy!

A SHEROE, is not just a female Hero!  She's much, much more...She's a Warrior!  Oh, you won't find accounts of her battles on CNN or your local news.  But believe me every last war campaign is recorded in heaven.  There were single mothers (divorced, widowed, or otherwise), that worked several jobs  keeping their children fed and warm. Sheroes who have travelled the world but always come home to minister to our children and grandchildren teaching them God's Word and Way!

Some Sheroes are now failing in health, either physically or mentally.  Robbed of their unwavering vitality and acuity but were still lauded, as any disabled soldier should be for their past contributions!  We had Sheroes who are one the last of her generation and a Sheroe who although in her senior years,  still cares for her  mother who is in her nineties.  This Mama Sheroe was there with her Sheroe cubs: a daughter and granddaughter..talk about stamina!

Preacher wives, Care givers, Retirees, Prayer Warriors, and would you believe  even a Security Guard!  We had a chance to hear heart felt testimonies of courage, love and down right resilience from women of all ages who were profoundly grateful to have these  Sheroes in their lives!

Now here's the deal!  We're standing tall on the Shoulders of these Sheroes. They are showing us the way to a life of  God-honoring purpose, passion, and perpetuity. But how will we represent Sheroism for those coming behind us?

Here's a thought by one of my favorite authors:  Priscilla Shirer,  from her book, The Resolution for Women


Choose to live today with tomorrow in mind.

>He spoke of spiritual inheritance

>He encouraged God's people to make today's decisions with tomorrow in mind.