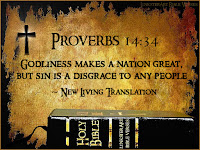 It's been said that money, politics, and religion should never be discussed in polite conversation!  I don't want to be rude but I've just got to say something about what's happening in our country today! I'm appalled, saddened, and quite frankly confused!

A confession is needed here:  Since the 2016  U.S. Presidential Elections, I've tried hard to not get emotionally embroiled in the fall-out of Donald Trump's rise to the highest office of our land! Between the lies, constant media reporting of Talking Heads, and the president's insane comments and twitter rages... I just can't take it!  I do have to tell you that God has heard plenty from me concerning it all.

Perhaps like me (a Bible reading and believing Christian) you find yourself asking this question:  How can many Conservative Evangelicals actively and vocally support Trump's political base?

I took a break from escapism to do some research.  Here's what a few prominent and influential Christian Evangelicals  are saying about the current administration.  People like Tony Perkins, head of The Family Research Council; Robert Jeffress, Southern Baptist Pastor and  member of Trump's Evangelical Advisory Board; Rev. Franklin Graham and his sister, Evangelist Ann Graham Lotz (a woman I've long-admired); Rev. David Jeremiah and many others have offered these responses:

I want to be perfectly clear.  I am in no way demeaning any of the above.  If they are really Christians they are my brothers and sisters and I am commanded to love them (I John 3:14-16; Rom. 12:18).  They have the right to vote for whomever they choose but somewhere there is confusion either about what the Bible really says or their views on what Makes America Great Again!

Yes, Trump has been on the right side of the Bible in the area of: Pro-life, Religious Freedom, His stance on Israel and his role as a leader to protect this country from invading forces.  Although admittedly he and congress would be wise to introduce "prayer" in their strategy for developing a fair and humane immigration policy.

But here is where I think Some and I have to keep saying Some, because All Conservative Evangelicals have not been sipping,  Trump's Kool-aid, are misinterpreting the heart of scripture:

-- Trump is president because God wanted him there...not because Republicans put him there.  So don't think that any political party can wield the necessary power of transforming the sin condition of America through legislation and/or policy!  Only prayer, the undiluted truth of God's Word, and a desire for Repentance will do that (2 Chronicles 7:14)

-- We can never say that the personal morality of a nation's leader doesn't matter as long as his policies are in the right place!  I voted for Clinton the first time around but did not the second because of moral reasons.  I voted for Obama both times but have been grossly disappointed in his back-peddling on key moral issues I probably would not vote for him again.  Both of these presidents had policies that helped African-Americans and poor people in general socially but none of those policies made for  a more righteous nation.....They Didn't Make America Great!

Proverbs 14:34 says:  Godliness makes a nation great, but sin is a disgrace to any people!


Now is the time to obey God with a true Christian heart
and Kick Biased Politics and False Religiosity Out of Our Beds!
Pray Children Pray that when Jesus comes
we'll be on the right side of both!!


UNTIL NEXT TIME...
If you would like to leave a comment please send an email to: sisters4sisters@att.net OR  scroll to the bottom of my blog page at  http://alittlewiser63.blogspot.com  click on the  no comments by the pencil and it will change to a writing space.
Posted by alittlewiser63 at 10:50 AM