OUT OF THE SHADOWS...INTO THE LIGHT!!!

An interesting observation I've made this year has been that there are multiple interpretations of the statement:  Black Lives Matter! What was once an inspiring and positive message against violence has now actually incited violent acts.

When did this phrase become so offensive?  Offensive not only to indignant white people but black folks as well.   I thought I knew what BLM meant. After all, the expression has been around since 2013 when George Zimmerman was acquitted of the shooting death of Trayvon Martin.

It was the brain child of three young women of color to protest the growing violence and deaths of black men by police without retribution.  Repeat occurrences in 2014 against Eric Garner and Michael Brown made national headlines but so many others didn't.  The Armand Arbery and George Floyd murders this year was the ultimate tipping point.  These murders united people of diverse backgrounds and brought to light injustices of every kind in a way never seen before.

Black Lives Matter is now a global rally cry for people of color anywhere bias exists whether it relates to economic empowerment, gender differences, or sexual identity.  And as such it has also become a lightning rod for those who are pro police or have strong aversions to the LGBTQIA communities, feminism, and anything that challenges the conservative status quo.

Thus,  All Lives Matter becomes a popular retort.  Much like the push backs heard when the term African-American  became popular (We're All Americans!) Or the celebration of Black History Month (History is History!)  BUT IS IT?  Those who denounce the need for such know little about life in America as an Other [anything other than a White Anglo-Saxon Protestant that's been dominating America for decades]. What is so discouraging is that profound DISTINCTIONS MUST BE MADE before visibility is possible! One MUST step out of the shadows to get rights, justice, or recognition that comes so easily to some!


EVERY KIND OF LIFE MATTERS! 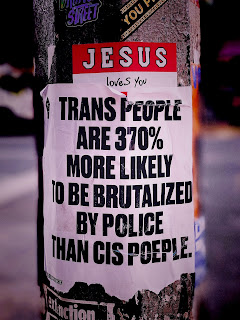 This has been our path for centuries:
I could go on and on! ALL LIVES DO MATTER. I know it from history. I know it from current events, but I also know it from Elohim,  Creator of the Living and the TRUTH He inspired.  It would do each side of the Black Lives Matter movement (Pro and Con) to remember:

AS YOU STEP OUT OF THE VALLEY OF THE SHADOW OF DEATH
STEP INTO THE MARVELOUS LIGHT OF GOD'S TRUTH!