Today's News Headlines
At Coronavirus University we still have a  lot to learn about dealing with a pandemic.

Nope!  We aren't nearly ready for a victory celebration or achievement awards.   Hospitals are still overwhelmed.  Black Americans and the poor underserved and dying at a disproportionate rate. The media is still inciting panic and politicians are still fighting!

These are only a few known outcomes of this deadly pandemic in America.  There is so much more we don't know!  What is equally disturbing is the behavior exhibited by many the further we move along in the crisis.  Hoarding and price gouging continues. In spite of mandates for social distancing, mass gatherings and parties are still taking place.  Politics over people!  Profit over preservation of life!  It is unconscionable.

ARE WE READY FOR DELIVERANCE?

America for so long has been touted as the Promise Land of the world!  A Christian nation.  It was known as a place where anyone with skill and perseverance could live comfortably and safely.  A place of profit and opportunity.  So much so, that we attempted to close our borders (to some) in order to preserve our coveted resources. 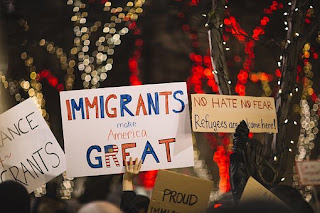 In 2001, nineteen years ago we were furtively seeking out foreign terrorists who threatened our nation.  We found that some of the more dangerous ones were being born and bred right here. They didn't wear the traditional muslim garb, but hoods and swastikas, sported gansgsta bling, and even police uniforms!  Isn't it ironic that even with the media hype and protests that what's  getting our attention right now is a mutating bacteria, contagious, and lethal? A virus of which we have no cure or really know a lot about.

Some biblical pundits are quick to infer that Coronavirus is a sign we are entering the Tribulation Period (Seven years of worldwide devastation rife with disease, destruction and mayhem as recorded in Revelation chapters 6-18).  COVID-19, the pestilence described there.  That is not my eschatological view.  What we're seeing now I believe will be benign in comparison.

If I was to use a biblical analogy, it would be more like the cyclical events chronicled in the Book of Judges.  It is there that a nation favored by God chose to be governed by human reasoning rather than a theocracy.   That nation compromised the security of a Sovereign God and His edicts for a life of self indulgence and had to suffer the consequences.  Does this sound familiar?

Unity in the Triune God
In a Divine ruled government there is no bipartisanism, only perfect unity in Triunity!    No political agendas or powerful PACs pressuring for life-altering decisions.  With so much infighting between Democrats and Republicans, even at the state level, it's hard to have confidence in either party's decision-making.  Sadly, the pages of the Book of Judges is flashing before us!

No Definitive Leadership
If you are unfamiliar with this Bible story, let me summarize its theme.  Every time Israel, God's chosen people faced a crisis, they humbled themselves,  cried out for help, and God delivered them!  Peace and prosperity was restored and the nation remained loyal to the Lord. UNTIL...they eventually returned to their old ways!!  God then allowed yet another crisis to bring them to their knees.  No leader arising to power was able to provide or sustain the consistency needed.

Hardened Not Your Heart
The story was always the same: peace for a season; eventual back pedaling,  punishment, pleas for forgiveness and deliverance.  That was THEN but can be bank on that NOW? Do we dare test God's patience?  Is it time to get back to business as usual OR should we change the  business model altogether?  What is God saying and are we really ready to listen?!

The Coronavirus has unleashed an impressive change of attitude and goodwill among the majority during this time. Everyday I see acts of kindness and generosity that are applaudable but really should be the norm.  And as in the Book of Judges, we too have our fair share of Heroes and Sheroes stepping up to help get us through.  But there is so much more to be done. More compassion to extended and more hearts to be changed.   Will a stimulus check be enough to change our attitudes on spending? Will opening up restaurants, sporting events, and other forms of entertainment our priorities?  Hmmm!

(But don't Expect to Graduate until All Courses are Completed!)

If you would like to leave a comment please send an email to: sisters4sisters@att.net OR  scroll to the bottom of my blog page at  http://alittlewiser63.blogspot.com  click on the no comments by the pencil and it will change to a writing space.
Posted by alittlewiser63 at 11:53 AM No comments:

WHAT HAPPENS THE MORNING AFTER? 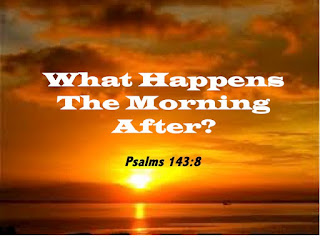 I've had some interesting morning after experiences in my life. Most have not been my proudest moments!

Mornings after a blow-out with my husband or a relative.  Mornings when I ate too much of a favorite food and paid the price with digestive upsets.  And yes, mornings that kept me on my knees at the toilet bowl praying but with a throbbing head and blurry eyes!

(Come on people! We ain't always been saved or acted like it!)

What I'm saying is that most morning after experiences are filled with regrets, yet become times of reflection where we never felt so human!  Weak, vulnerable, and fearful we become keenly aware that WE ARE NOT IN CONTROL OF ANYTHING!!  Without a single seminary class we've acknowledged the transcendence of God in our lives.  He is distinctly different from His frail creation, and we humbly submit to Him for help!

I imagine that's the way the disciples felt the morning after Christ's resurrection! (Talk about a week-end!)  Roman guards were all over the place.  Friday's three hours of darkness midday and an earthquake causing dead men to walk out of graves put everyone on edge. (Matthew 27:51-53)  Not even Saturday was peaceful.  The disciples scattered and went into hiding for fear of their lives.  Could they be the next big event in Jerusalem? (Mark 14:48-50; 24:36-43)

The religious Pharisees, instigators of the crucifixion were busy doing damage control preserving their pious position among the Jews but concealing their devious actions. (Matthew 27:62-66).  The morning after Christ's resurrection they bribed soldiers to lie and say Christ's body was stolen. (Matthew 28:11-15) 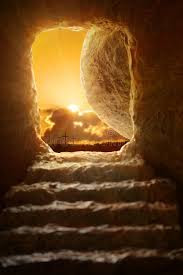 The impact of Christ's death was far-reaching.  Other people were having morning after experiences too.  The women disciples He appeared to and anointed to be the first witnesses of His resurrection. (Mark 16:9-11; John 20:10-18; Matthew 28:8-10)

Today, like 2,000 years ago, we are living out a significant morning after!  Yesterday, most of us celebrated Resurrection Sunday like none we had ever seen! We were separated from church and family members, some fearing for their own lives in hospitals and cities with rising death numbers from COVID-19.
Common Easter traditions were pretty much defunct.

So if you are among those still pining over the way it used to be, take a moment to read what the angels said to the women at the tomb:

I truly believe that we will one day be able to celebrate Resurrection Day similar to the way we used to! However, I hope it will become more than a Sunday on the calendar that comes in the Spring.  I pray you will see it as a day of new beginnings, new hope, a new life in Christ! (2 Corinthians 5:17)

Jesus is Alive and He is the same yesterday, today and forever (Hebrews 13:8).  He has not changed!  It is because of the Lord's mercies that we are not consumed! As bad as things are, it could be worse!  His compassions fail not.  They are new every morning: great is His faithfulness. (Paraphrased from Lamentations 3:22-23)

In your darkest hours.  When joy is smothered in grief and pain. When jobs are lost.  Pay checks stop coming and you don't qualify for a bail out or government subsidies! Will you be strong enough to make it through the night and brave enough to ask..

WHAT HAPPENS THE MORNING AFTER?

TAKE COURAGE!  CLOSE YOUR EYES!  AND PRAY THIS SCRIPTURE:

Let the morning bring me word of your unfailing love,
for I have put my trust in you.
Show me the way I should go, for to you I
entrust my life.

If you would like to leave a comment please send an email to: sisters4sisters@att.net OR  scroll to the bottom of my blog page at  http://alittlewiser63.blogspot.com  click on the no comments by the pencil and it will change to a writing space.
Posted by alittlewiser63 at 2:24 PM 1 comment: