DISCERNING THE ''SIGNS'' OF OUR TIME! 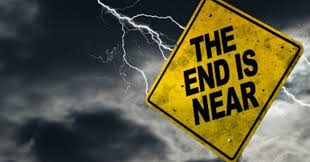 WELL THEY AIN'T SO FUNNY ANY MORE!

I'm a people watcher!  One of those weirdos who gets a kick out of watching the mannerisms, habits, and ways people (and sometimes animals) navigate situations when they think no one else is watching.

As a long time observer of life, I enjoy seeing people express their particular views about what's happening around them.  Sadly, the pandemic has severely limited my field studies.   I'm no longer sitting around in large crowds for extended amounts of time peeping someone's game!

Instead from a distance, I can still speculate where a person stands politically, religiously, or culturally by  simply reading the messages printed on their clothing or signs posted in their yards.  Let me share a few of them here. 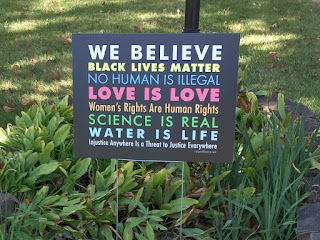 This person with one sign lets the world know how he feels about EVERY THING!  Their live and let live attitude is the answer to today's culture war going on. As you can see, there's a strong emphasis on equal rights and social justice.  In theory every statement on this sign feels right in spirit! It is tolerant, open-minded and in some ways even loving.  But it lacks context, boundaries, and a reliable standard of truth that could lead to dangerous thinking and actions.
It reminds me so much of two powerful scriptures in the Old Testament:  All a man's ways seem right to him, but the LORD weighs the heart. (Proverbs 21:2) The second one is even more revealing.  In those days there was no king in Israel, but every man did that which was right in his own eyes. (Judges 17:6; 21:25)
The social movements of our time, even those with justifiable motives, will never achieve their ultimate goals without a heart transformed and molded in a righteousness by God (John 15:5).  Even so, I find it sad that many protests starting out peaceful and law-abiding have been invaded by fringe groups pushing their own selfish agendas.  This has caused confusion and allowed hostile interventions that were not initially present creating more violence.
LOOKING FOR A SAVIOR ALREADY HERE 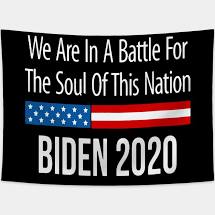 It's been a tough four years for America!  What we've had to endure has shaken the foundations of every belief system one can imagine. Not since the Civil War has there been so much chaos, divisiveness, and violent unrest in our nation.  Corruption continues to be exposed from the church house to the White house and our level of trust for governing authorities is at an all time low and still we look for hope in the wrong places!

Mind you, the vote is still a powerful tool in the hands of citizens and must be preserved at all cost in America!  God may in His unfathomable wisdom use it to stem the flow  of sin permeating our cities.   VOTE!  VOTE EARLY!  VOTE PRAYERFULLY!
BUT DON'T BE FOOLED ... VOTING WILL NOT BE ENOUGH!
True, we are in a battle for the soul of this nation and everyone would like to see America great in the eyes of the world again, but not because of our democracy, economy or status is at risk.  Not because our favorite candidate is elected! But by putting our faith in the ONE WHO IS ALREADY IN CHARGE!  Upon whose shoulders all governments rest (Isaiah 9:6)!
We are in jeopardy of losing a precious gift: GOD'S MORAL COMPASS that guides the decisions and actions of our earthly leaders.  Romans 13 says, the authorities that exist have been established by God (vs 1). They are God's servants (vs 4). He is the one who puts people in authority! And be sure we will all have to give an account one day(Romans 14:12; 2 Corinthians 5:10). That day somehow seems closer than we want to think.
A TIME FOR THOUGHTFUL DECISION MAKING 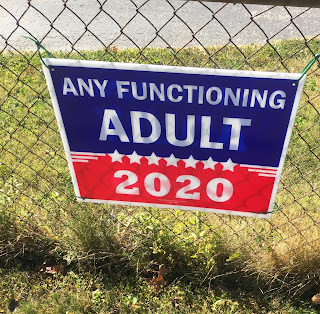 This sign found in a neighbor's yard shows the level of frustration people are feeling over current situations.  We can all relate.  Yet these generalized feelings of despair, unrest, and insecurity from the harshness and violence surrounding us are further signs that last days are near.  There is a greater need.  One that a job, healthy economy, equal rights, and personal power or pleasures won't satisfy!  WE NEED JESUS!
DISCERN THE SIGNS OF OUR TIME
REPENT!
12 Because of the increase of wickedness, the love of most will grow cold,
13 but the one who stands firm to the end will be saved. 14 And this gospel of the kingdom will be preached in the whole world as a testimony to all nations, and then the end will come.

Posted by alittlewiser63 at 9:32 AM No comments:

ARE YOU TIRED YET? Try Some Goose Sense!

Remember when children played outside and you had to make them come in the house? Yeah, me too!  Now it's the other way around.  You have to threaten bodily harm to get them out in the fresh air (can't put the cell phones and video games down)! And that was BEFORE the Pandemic!

One thing keeping me emotionally and physically stable as this virus goes on has been getting outdoors!  I walk or bike nearly every day.  Just me and Jesus bopping down the street trying to see what's new and interesting in the neighborhood.

Today I saw this and thought I'd share a thought or two on how a simple scene in nature can impart a bit of wisdom and a clear perspectives on what's happening in the world today!

My apologies if the above video didn't play.  I'm still working on my social media skills, but hopefully you saw something that looked like this! Yep, it's those darn Canadian geese crossing the road again!  One right behind the other.   No pushing and shoving.  Falling right in line orderly and peaceful.  And their leader? He (or she) is patiently waiting until all make it to the other side! I think there's a lesson in that! 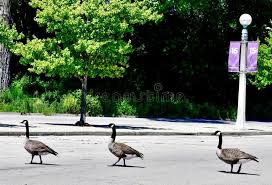 My Friends, if we're going to get to other side of the chaos we're experiencing today we need some good old fashion, goose sense!  Each day I think TODAY will be different!  Somebody will have learned to keep their mouth shut!  TODAY, someone will say ENOUGH!  It's not about politics, or whether the stock market is up or down, it's about people in pain!  TODAY, before I shoot, or choke, or maim another person....I'll just take a moment to see if there's another way to work this out.
Follow the Leader was one of the games we'd play once we got out in that fresh air, I spoke of earlier.  I don't know if kids still play it, but I sure hope they're keeping it on the playground and not trying to imitate real  life!  Folks, We are in a Real leadership drought!
We're hard put to point to any facet of our society where sin and corruption has not infiltrated. Not an institution that has not traded its moral compass for greed and power.  And maybe that's exactly what our Omniscient God wants us to see...there's another way!
I saw it in the geese today. 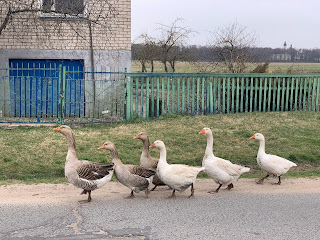 Winter is coming.  We need to prepare.
The next time you get down on your knees to pray, ask God to give you Spiritual Insight on how to survive. Where to place your loyalty. Who to depend on for sustenance and support.  FORGET ALL THIS NONSENSE...ASK GOD  FOR SOME GOOSE SENSE!
UNTIL NEXT TIME...
If you would like to leave a comment please send an email to: sisters4sisters@att.net OR  scroll to the bottom of my blog page at  http://alittlewiser63.blogspot.com  click on the no comments by the pencil and it will change to a writing space.