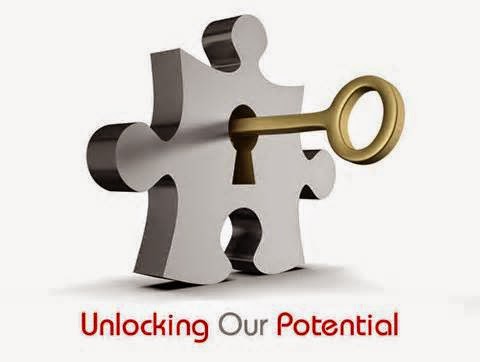 With God...Unlimited Possibilities!  This has long been my mantra for achieving life dreams.  Even when I dare not express them out loud fearing ridicule or when some insensitive dream crusher takes great pains to let me know such is out of the realm of possibility, I never stop believing that God can use me.

How wonderful to know that God does use ordinary women like you and me to achieve great things in the world!  It brings to mind 2 Timothy 2:20-21, But in a great house there are not only vessels of gold and silver, but also of wood  and clay, some for honor and some for dishonor. Therefore if anyone cleanses himself from the latter, he will be a vessel for honor, sanctified and useful for the Master, prepared for every good work.  As Kingdom Women, we all started out as shapeless, dirty globs of clay but now we are chosen vessels ready to be used by God!

Chrystal Evans Hurst ended this powerful study with a story of three ordinary women in the bible. They not
only share the qualities we discussed in past Kingdom Woman, lessons but they also share a very common name, Mary!  One was a young peasant girl selected from all humankind to become the mother of Jesus, our Savior.  Another was the quiet but introspective sister of Lazarus, good friend to our Lord as an adult.  And the last one was a female disciple who didn't let her past experiences, gender or low status in society keep her from serving right alongside the other twelve.

So what can these ancient sisters tell us about unlocking potential in the 21st century?  You'd be surprised.

Don't let the first Mary's meekness fool you.  Meekness is not weakness!  Yes, she was young, but she was also courageous.  A child out of wedlock was a death sentence in her day (Deut. 22:13-21).  Yet she accepted her divine assignment with determination and total confidence in God.  This  is so unlike the counsel of top life coaches of our day.  Many will tell you to put your confidence in your skills and abilities. Assert yourself against the competition when opportunities arise. Never leave an interview with unanswered questions, in fact come prepared to ask some of your own!  Mary's potential for greatness was not in an impressive resume but in a humble demeanor and quiet confidence in God! (Isaiah 30:15b)

Mary of Bethany, the second Mary had two qualities that are essential for a Kingdom Woman's success:   Scripture discernment and the ability to set priorities. Even under the scrutiny and criticism of close relations, Mary chose that which was important, availing herself of the Word of God before setting about daily affairs. How many hours have you sat in so-called success seminars; career workshops, and when possible at the feet of perceived gurus hoping to be mentored to power and acclaim!  All at the expense of personal time with the Lord; praying and reading His word!  Mary never ceased marveling at the Words of Christ.  Two thousand years later Christ is still honoring her decision.

Many miss just how radical Jesus was for His time until you take a close look at His relationship with Mary Magdalene.  She was in my eyes, a fully formed Kingdom Woman! In the vernacular of today, she was FIERCE!  She had her own money, in fact, a woman of means as she traveled with and supported the ministry of  Christ (Luke 8:3).  She was a leader among the women, her name being mentioned first whenever female followers are named (Luke 8:2-3; Matt. 27:56, 61, 28:1).  And while most of the disciples hid away in fright she was a faithful witness of the crucifixion and resurrection of Christ. In  fact it was she, whom Christ chose to first to reveal Himself!  Mary was a servant above all else! How great is that! Wasn't it Christ who said, whoever is great among you shall be your servant (Mark 10:43).   Mary always showed up to serve and so should we!

Yes, our Kingdom woman study has ended but our influence, power, and reign will continue through our legacy.  Just remember what the three Mary's taught us, like a Chosen Vessel:

1.  Be Clean  (Holy and acceptable to God)
2.  Be Empty (Humbly receiving His Word)
3.  Be Available (Hands open for service)

Until we meet again!