THE COLORS OF LOVE: Racial Diversity in the Bible, Part I 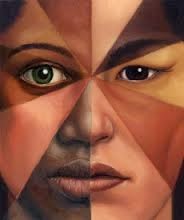 Unless you've been living under a rock, you cannot deny that America is fiercely divided by race!  Even though we have a bi-racial president and strides have been made; we've yet to learn how to live as a multiracial diverse society!

Years ago we bragged of being Christian and the Melting Pot of the world, but sadly evidence shows the opposite.  Racial violence is on the rise and although disproportionately victimized, even non-whites are drinking the water!  Colorism (prejudice or discrimination based on skin color among people of the same racial group) prevails at many levels.

Bleaching creams are still top money makers in the cosmetic industry while it appears that darker skinned youth prefer lighter skinned youth to bully or demean on social media.  It really depends on what is on trend in popular culture.  One year we're celebrating darker hues in movies, fashion, or music)and the next year light, darn near white icons!  Why can't we celebrate it all?

The Bible may not be a perfect example but one I think Christians can learn from if we truly want to know how to live, work, and minister in our present day climate of racial volitivity.  Why it is not referenced more often as a model is another matter!

It was only in the 1990s that I became aware of any racial diversity at all in the Bible!  All the pictures on my Sunday school card as a child (we didn't have fancy curriculum) showed white Bible characters. Moses and the people of Israel were white.  Joseph and Mary were white.  Jesus and His disciples.  Especially, Jesus because there was a big picture of Him in every church I attended.  White Jesus was even on the fans we got from the funeral home!

What a shocker to learn that the Creator has a penchant for color even when it came to the crown of  it all-mankind (Hebrews 2:7).  People of all colors and ethnicities tell the Bible narrative of God's love and grace for His people.  He presents them in the fullness of their humanity showing the world their True colors--not their Skin color!  People are just People.  They can be magnificent in intelligence, beauty, and leadership and yet flawed and depraved in their selfishness!

We must learn to see them the way God does through the Color Lens of Love!


"And hath made of one blood all nations of men
for to dwell on all the face of the earth,
and hath determined the times
before appointed,  and the bounds
of their habitation."
(Acts 17:26)


NEXT WEEK: PEOPLE OF COLOR IN THE BIBLE!

Until we Meet Again..
Posted by alittlewiser63 at 6:07 AM